A Brief History of Time.

This ain’t it chief. 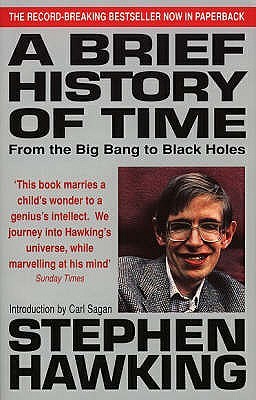 Gibberish all the way down

Okay, maybe I am being a little harsh on this book - but I have good reason. This book is probably the most famous pop-sci book ever written, but somehow, its the most disappointing one I have ever read. Before getting into the specifics, let me just say, Hawking is a legend, an I have immense respect for him as a physicist and a science communicator, he made science cool for many, and as a kid, he really got me into physics for a bit (I remember loving his other book, “The Grand Design”, which I found accessible, even when I was in 8th or 9th grade!)

I picked up this book for its reputation of introducing the wonders of cosmology to your average layman, all by building up to in a nice graduated manner. It even delivers on this promise, but only for about halfway through the length of the book. Somewhere along my reading of this work, I felt like I was reading gibberish. There were leaps of logic that were unexplained. It made reading this book an absolute chore.

Imagine reading a book on programming. The author start with the basics, arithmetic, printing text, a quiz program - and the next thing you know, the author is neck deep in explaining why homoiconicity in a language makes for superior metaprogramming easier since reflection is easier when you have one data structure constituting the language. Now, for a programmer, the concept is not too hard to grasp, these terms are not completely unfamiliar, and with a little bit of a nudge, she can grasp it, but if you are a layman, you are screwed. Too many new terms being thrown as if its common knowledge. This is what Hawking did to my brain. I was confused, with some sentences making practically no sense. (And I would like to think, I am not very stupid. I did study a lot of this stuff because of my school and college physics classes.)

This book should not have been a book. This books is confused. It assumes too much from the reader after the first half.

This book should have been a comic book, or a heavily illustrated guide. It should been written in a more lucid manner, with the assumption the reader is stupid. The point of this book is to inspire awe in our cosmos, and the magic of science. This didn’t. I had to think, hard, and then only did I feel awe. Hawking got in between me and awe.

I was so taken aback that I disliked this book, I looked online, desperately finding smart people echoing what I felt, because I can’t be the only dumb one who found this book so devoid of meaning. Fortunately I found one guy, who echoed my belief, Pulitzer winning, Harvard educated Charles Krauthammer, who said this

I can report that, having devoured Hawking’s original book not once but twice, it leaves no trace. That is because it is entirely incomprehensible. Illustrating the book seems to me akin to tarting up hieroglyphics with Etruscan annotation. Want an invigorating scientific experience? I have a better idea: the new Hayden Planetarium in New York.

Maybe I am not that stupid after all?

The 4/10 is for the first half. Its interesting, and well written. The conclusion was also nice. But readers are better of going elsewhere for cosmos related to science writing. This just ain’t it chief.