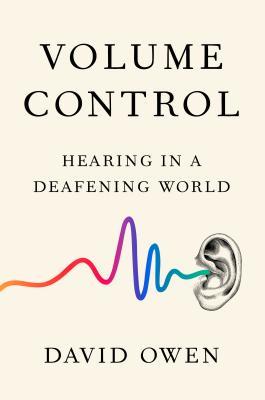 Volume control is a book about hearing, deafness, and effects of the noisy world on our ear. Very early on, it’s revealed that this book initially started as a New Yorker article, and it shows. Let’s just say, the science in this book wasn’t particularly hardcore. It’s one of those pop-sci books that you can instantly tell is written by a journalist. Its got an easy, conversational tone throughout, with lots of anecdotes, with author David Owen interviewing and delving into the lives of those of afflicted with hearing problems.

The book covers a broad spectrum of hearing-related topics. These included how hearing works, the history of ear research, deafness and its causes, noise and its effects, tinnitus, hearing aids, the stigma surrounds deafness and many more. At the beginning of the book, David attempts describing the functionality of the ear, and how we can hear. It’s a good attempt, but a few diagrams could have made the experience much more pleasant, and the presentation much more lucid. I was kind of amazed at the lack of any diagrams throughout the book; their addition would have been very very useful since some of the descriptions, though written beautifully, don’t give the nice visual that a diagram would have.

As the book progresses, the science gets progressively scant, with the book becoming more about the lives of people with hearing issues than the scientific reasoning behind issues. There is fun trivia dispensed along with cute anecdotes, which made me feel like I was reading a neat article in a Sunday magazine, as opposed to a science book.

The chapters that I was most interested in, Tinnitus and ear care didn’t disappoint though. They delved into the history and the curiosity that is tinnitus. It was informative, and fun to read.

While I was disappointed by how shallow the book felt from a scientific point of view, one can’t deny David’s knack for storytelling. The prose is breezy, the characters in the stories are endearing and the idiosyncrasies of the small town, the people and their histories jump off the pages. David Owen is a great non-fiction writer, and his writing and storytelling are the real stars of the book.