How to Take Smart Notes.

This book has the potential to change my life. Its all in the execution now. 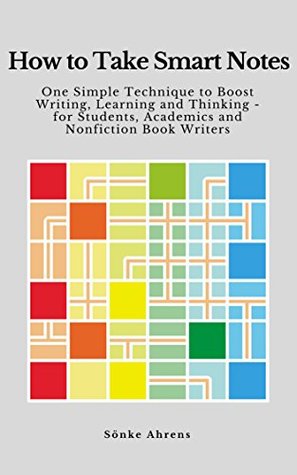 Ever so often, you come across ideas that, if implemented properly, can change your life. This book has presented to me an idea - Zettelkasten - that I believe has this potential.

At its core, this book is a sales pitch for the virtues of Zettelkasten, a method for personal knowledge management popularised by German polymath Niklas Luhmann. Luhmann was a prolific writer, having written over 70 books, and 400 articles in his academic career. He wrote on a wide variety of subjects, and attributed his massive bibliography to his note taking system - Zettelkasten. Zettelkast in, which loosely translates to “Slip Box”, is a system for curating ideas from various notes. Over his lifetime, Luhmann amassed over 90,000 notes in his slipbox, each note taken on an A6 card. The notes formed a web of knowledge that allowed him to synthesize new ideas by intermingling of the many ideas he was exposed to. The beauty of his approach was the ideas were captured in a bottoms up, associative manner. In a normal note taking system, a top down heirarchy is followed. Something like

Luhmann approached things in a different manner, he let the ideas themselves decide their relationship with other ideas. The various notes linked to each other, in a manner that flowed from idea to idea. He turned the heirarchy upside down.

The art of the Zettelkasten

Zettelkasten as a system is extremely simply. I can break it down into a few simple steps:

Step number 3 is tricky, and needs some trial and error to get right. Converting Literature notes to Permanent notes is somthing that would come with practice, something that I haven’t yet mastered.

The idea is over time, the slipbox will attain a critical mass that allows for continous idea generation.

While the idea presented in the book is great, and the tips in general are really good, this book has quite a few shortcomings. For one, this explains the idea of the system very nicely, but faulters in explaining the implementation aspect. How to apply Zettelkasten in your daily workflow? I feel like this book doesn’t get into the practical aspects adequately. I am working on implementing Zettelkasten within Logseq, my knowledge management system of choice. I have moved away from my legacy system, and will report back here on my after a few months to let you know how its going.