In praise of writing.

Writing is the most undervalued tool we all have access to.

Sometime during the pandemic, my life changed profoundly for the better. This was because I started undertaking three new activities in my routine which have massively improved the quality of my life - reading books, meditation and writing1. This essay is going to be about how writing, one of these life-changing activities, is in my opinion, the most underrated of the lot.

Now, broadly speaking, writing can be viewed to be revolutionary using two lenses:

I am not going to get into how writing is revolutionary from an epistemological standpoint since I am neither an epistemologist nor a historian. If, though, you are inclined to read about how writing was revolutionary in the progress of humanity and knowledge, I recommend reading Sapiens by Yuval Noah Harari. Whichever lens you view writing from, writing as a tool is a swiss army knife of sorts.

There have been no problems that I have faced that I could not fix, or at least alleviate by writing. Writing is not only curative but also preventative. I think of writing as a hidden panacea because almost everyone can write - you don’t need anything more than a pen and some paper - yet most rarely do. This is because I don’t think most know the true power of writing; the pitches in praise of writing are few and far in between, with most pitches extolling the virtues of the various forms of journaling 3. While I don’t journal (for reasons mentioned in the previous footnote), I do write more than the average person. It’s something that I started doing after I began reading more, with my first many pieces being book summaries and reviews. This was my gateway into more standalone writing like this essay.

There are many reasons why I write.

We live in a time of content overload, with excess consumption of (unfortunately) mostly garbage. The little valuable information consumption that we may chance upon is also often forgotten. The biggest reason for this is the lack of any feedback mechanism in place. The best way to make anything stick is by having a tight feedback loop. This is something that Anders Ericsson, an expert in human performance, stresses in his book Peak. Writing is that very tight feedback loop.

I never used to take many notes while reading in the past. This changed after reading about Zettelkasten in How to Take Smart Notes. Now, I use a form of Zettelkasten and take notes for every book I read. While taking them, I make sure to never copy anything word for word and try to avoid highlighting interesting passages. Instead, I rewrite the ideas that I find interesting in a tiny book that I keep close to me. 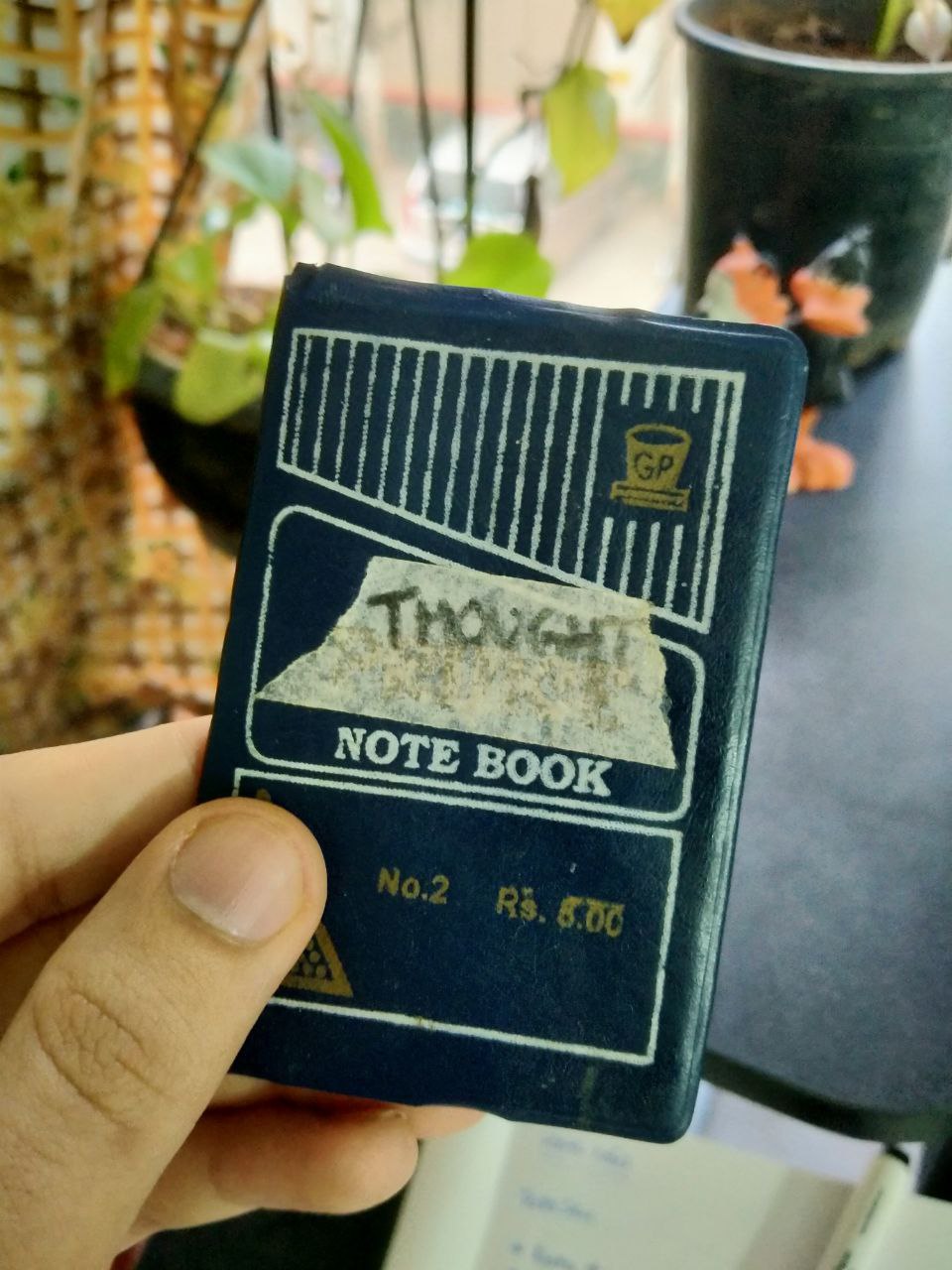 My ₹5 book of thoughts

This allows me to easily and quickly jot down ideas that captured my fancy, something that I can later transfer into my digital Zettelkasten 4. This approach of using writing as an integral component of my consumption has greatly improved the absorption and even generation of newer ideas. I regret not doing this sooner.

My essays on my blog are a manifestation of me using writing to clearly organise my thoughts and ideas. Most people know this, but don’t appreciate in full the power of forcing yourself to articulate your ideas in the written word. It is another form of a tight feedback loop, where you are not only forced to express your thoughts clearly but also forced to listen to your own thoughts (and sometimes conclude that they are absolute manure). Ideas have zero value. Thoughts have zero value. It’s just potential. Writing is the first step towards realising that potential. It’s the litmus test for any idea, a simple, accessible litmus test. Clear thinking is truly clear writing.

As a mental crutch.

From a day to day practical standpoint, this is probably the most useful of all the uses of writing. At the risk of sounding like a VC techbro 5, I want to bring up the Zen idea of having a “mind like water” - the state of mind in which you are unencumbered and highly perceptive, like water. Pour water in a glass, the water takes its shape. Throw a rock at a still pond, the water reacts commensurately. My interpretation of this analogy is keeping the mind stateless. The brain was never a tool specialised in keeping state. It’s a tool specialised in making sense of data and noise. What is the perfect tool for keeping state? A pen and a piece of paper.

Whenever I am in thought, I have made it a habit to keep multiple scratchpads within an arms reach. I found that this has greatly helped me in thinking my way out of icky problems. It was during one of these thinking sessions, when I thought I was absolutely stuck but writing helped me find a way out, I appreciated the power of my little scratch pads. My favourite tools for my scribbling around are the Pilot Frixion, a jet flame torch and my cheapo scratchpad. This has greatly encouraged my doodling and thinking in writing because it has a great pay off at the end of it all:

Using my blowtorch to clean up my heat sensitive scribbles.

I enjoy using my blowtorch for clearing away my scribbles so much that it has prompted me to write more while thinking, which has moved the needle in keeping my brain as stateless as possible - just like water.

I have been writing for a long time now. It has been very consistent over the past 6 months because I have grown to enjoy it. It’s a fun activity, and I am glad that I have taken a liking to it.

Pick up the pen. Or keyboard. Or pencil.

Writing is arguably the greatest invention of humanity. It would be a shame if you don’t use it to the fullest. This concludes my sales pitch.